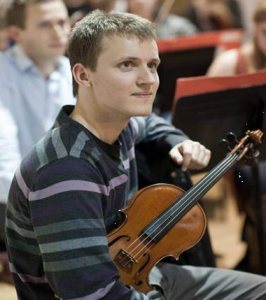 Iain Gibbs began playing the violin at the age of six and went on to study with Erik Houston at the Royal College of
Music, Junior Department from 2001–09. He studied with John Crawford at Trinity Laban Conservatoire before
completing the Masters Course at the Royal College of Music, studying with Detlef Hahn. In August 2016 Iain became a member of the Orchestra of Welsh National Opera. He regularly works with the John Wilson Orchestra and has also worked with the Orchestra of the Royal Opera House, the
Royal Northern Sinfonia and the BBC Symphony Orchestra. Iain has also performed at the BBC Proms, recorded for Seth McFarlane and performed with Lady Gaga and Tony Bennett at the Royal Albert Hall as part of a gala evening in support of WellChild. Iain has previously performed with the Havering Concert Orchestra in June 2012 (Vaughan-Williams’ Lark Ascending) and June 2014 (Beethoven’s Violin Concerto). He plays a 1928 William Hill violin, generously lent to him.