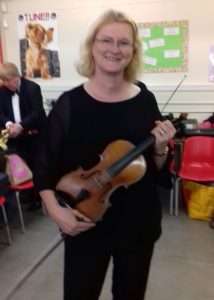 was younger, Cathy was a member of Redbridge Youth Orchestra until the age of 19. After this, she only played for pleasure apart from helping when her children were part of their primary school orchestra.

She worked at what was May & Baker’s in Dagenham for 15 years, only leaving to raise her young family. Whilst there, she  completed a degree in Chemistry, and later gained a second degree from the Open University in Environmental Studies (She was bored and wanted something to occupy her mind!). Later she returned to work at Dagenham for a few months during the shutdown, and later at Martindale Pharma.

When not working, she was a volunteer helper at her children’s primary school, helping to run a couple of lunchtime clubs, she was a school governor (including a stint as Chairman) and a Church Warden. Currently she is the secretary for her  local ‘Churches Together’ group in Upminster and a member of her PCC.  Currently she has a part-time job behind the bar at the Upminster branch of the Royal British Legion.  Cathy likes to keep busy!