Born in Kingston-upon-Thames, Katy moved from Surrey to Essex when she was 6 years old. Once there she soon began her music career. Firstly, the violin when she was 7 and then the bassoon at 10 (that she learned at Engayne Music School in Cranham). Subsequently, Katy partook in private lessons for both the piano with Elain Wooton and violin with Jenny Sheppard. 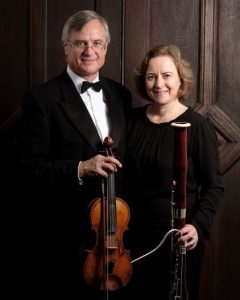 After leaving school at 16, she joined the Havering Concert Orchestra. There she performed in the second violin section moving to the first violins when Robert Ferguson was conductor. Alongside actively developing her music career, she worked in various clerical and secretarial posts in London as well as locally. This included interesting work with a firm of architects at the historic Ingatestone Hall.

In 1992 Katy gave birth to her daughter and decided to leave the orchestra whilst she devoted this period to raising Lucy. Some years later she rejoined the orchestra, this time playing in the bassoon section. This was initially under the baton of Michael Axtell, later Bill Brooks and most recently Lawrence Tatnall in 2019.

In addition to this, Katy has also been a member of the Brentwood Philharmonic Orchestra for many years playing the bassoon and violin. Alongside working in several music shops in Essex, Marks & Spencer and latterly working part-time in a local farm shop for 9 years.

Along with her orchestral playing, Katy is passionate about singing and has sung in church choirs in both Upminster and Brentwood. She obtained a Senior Bishop’s Chorister Award in 1992 (Chelmsford Cathedral) and has also sung with the Saint Hugh Singers (a group formed from the Royal School of Church Music Lincoln Cathedral course), the Poscimur Choir, the Cappella Singers under Freda Drage, Times & Seasons and the Hutton & Shenfield Choral Society.

In the meantime in 2012, Katy married Paul, our leader of the second violins as well as our Chairman! When Katy has time to relax she enjoys cookery, holidays, walks in the countryside and visiting National Trust gardens. And it is later this year (2019) that Katy and Paul, are relocating to Worcestershire where they hope to continue their many shared interests whilst enjoying their new garden. Thus following their dream of becoming involved in a musical world of Malvern and surrounding areas in Elgar country.