Angelo currently works as a professional musical director, arranger and multi-instrumentalist (piano, organ, violin, double bass, electric bass, trumpet, trombone, euphonium, flute and saxophone). He grew up in Upminster and attended the Coopers’ Company and Coborn School. Since having the 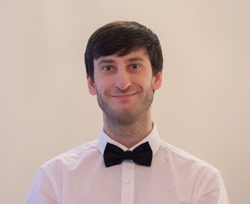 opportunity to sing with his school choir in St Paul’s Cathedral at the age of 11, he knew that music would have to play a key role in his life. He completed his Masters Degree in Music in 2012 and whilst undertaking it had the privilege of studying organ at Canterbury Cathedral with its Organ Scholar. He had previously been awarded an organ scholarship to study at Brentwood Cathedral in 2009.

Since university, Angelo has performed for Sky Sports during the London Olympics and also on Spanish TV. He has had the pleasure to perform alongside some of the world’s finest musicians, including Iain Mackenzie (Lead Singer at Ronnie Scott’s), Sammy Main (BBC Big Band), Eddie McManus (Bass Player to Shirley Bassey and Cliff Richard) and Geraint Roberts (James Bond Sound Track Arranger).

Angelo has conducted and/or performed in over 40 theatre shows across the UK and counting. He was the Musical Director for the ‘Elton John Experience’, which had previously performed at the likes of the Formula One in Bahrain and Wembley Stadium. With great pleasure, in December 2018, Angelo agreed to be the new accompanist for the Essex-based men’s choir ‘men2sing’, which is currently involved with the ITV show ‘Britain’s Got Talent’.