Please keep following us – lots to tell you in the New Year. New website, the next concert and more. 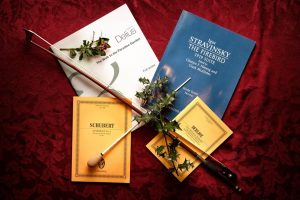 Hope you all enjoyed Saturday’s Concert as much as we did. Here’s The Man – conductor Bill Brooks.

Tonight, the 24 November at The Francis Bardsley Academy Havering Concert Orchestra’s will perform the last concert under the baton of Bill Brooks, who is retiring after a lifetime of service to music in Havering.

How do you do justice to a man who has devoted his life to music in Havering.

Bill’s first conducting role was to conduct the School Percussion Band at the Hornchurch Infant Schools Music Festival. He was 7. At 69 he is conducting the HCO for the last time. He has been our conductor for the last 13 years and before that was a cellist with the Orchestra.

You will find more details in our Programme available this evening.

Bill is a conductor, a cellist, a teacher, a mentor, a ‘Barber Shop’ singer and a wonderful person.

He has devoted huge amounts of time to the Royal School of Church Music (Essex and East London Area) and to the Bishops’ Chorister Award, and to music at Hornchurch’s St Andrews Church.

In the orchestra today there are three cellists who were taught by Bill, one was eight when her lessons started. Several where taught their orchestral skills in the Hornchurch Youth Training Orchestra when Bill conducted (1981 to 1992). One of these, travels 70 miles each week to attend rehearsals and says – “As I write this with a lump in my throat, I cannot imagine rehearsals without his encouragement, warm sense of humour and laughter”.

You will forgive me if I drop into the first person on this very special posting. I took up the cello aged 56 with no musical background. I had bought a cello – but how to play it. I asked a local music shop for anyone who could teach me. “Well there’s Bill Brooks but I think he is retired”. I phoned and well Bill gave up his Tuesday evenings and that was over 12 years ago!

So come and join us on this very special occasion. 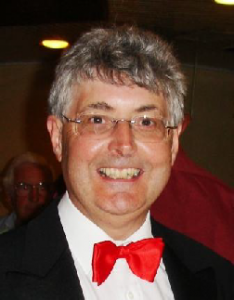 At 7:30 pm on Saturday 24 November, for our third piece, we will be performing no not Brooks’ but Pyotr Tchaikovsky’s Symphony No 5. But it will be the last symphony we will be playing under Bill’s baton.
We have played this work before, in the spring of 2016, but our conductor wanted us to play this work for his last concert – and we are only too happy to do just that.

This symphony is very popular with orchestras, there are billions of versions (we only exaggerate slightly) to listen too. The recurring main theme is used as a device to unify all four movements of the symphony. This motto theme, sometimes dubbed “Fate theme”, has a funereal character in the first movement, but gradually transforms into a triumphant march, which dominates the final movement.

There is a lot more about the Symphony and the other pieces in our excellent Programme, available on the night. But if you can’t wait, there is an excellent article on the symphony complete with the audio of these main themes. See https://en.wikipedia.org/wiki/Symphony_No._5_(Tchaikovsky).

We hope you will come and join us at 7.30 pm Saturday 24 November at the Frances Bardsley Academy to give Bill Brooks a fabulous send-off.

Yesterday evening we had our first rehearsal with our virtuoso soloist, Florian Mitrea who will be performing the Grieg Piano Concerto at our forthcoming concert. All I would say is that if the rehearsal is an indication of the concert performance, our audience are in for an absolute treat. Not only did it feel as if the orchestra, conductor and soloist had performed together forever, a more musical and charming soloist you could not wish to meet. Our snap shows our Chairman Paul Kelly making some announcements whilst Bill Brooks, is looking forward to his tea break, whilst our treasurer is in deep conversation with Florian…! 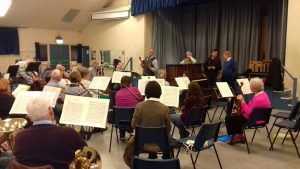 We hope you will come and join us at 7.30 pm Saturday 24 November to remember ‘those that will never be old’.
Picture by Bill Brooks of the score of George Butterworth’s Rhapsody – ‘A Shropshire Lad

At 7:30 pm on Saturday 24 November for our second piece we will be joined by the remarkable pianist Florian Mitrea. He will be performing Grieg’s piano concerto in A minor, op. 16. He is kindly supported by Making Music’s Philip & Dorothy Green Young Artists scheme, and he holds their award for 2017-19

Florian was born in Bucharest but has been based in the UK since 2008. His piano studies started in Bucharest and is currently studying with Boris Petrushansky at the Accademia Pianistica Internazionale in Italy.

Florian has participated in numerous master-classes, including those by Stephen Hough and John Lill. In 2013, Florian was granted a fellowship at Yale University. He is a Kirckman Concert Society Artist for 2018-19. In March 2018, Florian was appointed an Associate of the Royal Academy of Music and has also been awarded prizes in numerous international piano competitions.

You can read more about Florian at his excellent website https://florianmitrea.uk/about. You can also find audio tracks, videos and details about his latest CD there.

Now a bit about Edvard Grieg himself. He was born in Bergen, Norway in 1843. Like George Butterworth he used folk music to influence his own style. He brought Norwegian music to the world’s attention and helped Norway develop its own national identity.

Edvard wrote the Piano Concerto when he was 24 and it is one of the most popular piano concerti ever written. 17 years later he wrote sketches for another, but it was never finished.

Grieg did, however, revise the first Concerto regularly throughout his life and the final version was completed in 1907, only a matter of months before he died. The music is often compared to Robert Schumann piano concerto. We played this concerto back in the autumn of 2010 with Jeffrey Lague as the soloist – that was a great evening.

More information can be found at http://griegmuseum.no/en/about-grieg.

We hope you will come and join us at 7.30 pm Saturday 24 November to hear this wonderful concerto played by a brilliant international pianist.

At 7:30 pm on Saturday 24 November for our first piece we are mixing words and music to remember the Armistice.

We will be performing George Butterworth’s Rhapsody ‘A Shropshire Lad’, based on A.E. Houseman’s moving poems. We are delighted that the Performance poet Alexandra Wilde will read a selection of Housemen’s poems, including ‘Loveliest of Trees’ and ‘With Rue My Heart is Laden’.

The two songs cited provide the thematic material to the Rhapsody we are playing. We are not the first to combine the poems with the Rhapsody, the Proms in 2018 did this with the Halle Orchestra and Mark Elder – we can’t find a video of this on-line. Butterworth also set six of the songs to music in his song cycle. ‘A Shropshire Lad’. You can watch the Proms 2014 where Roderic Williams and the BBC Scottish Symphony Orchestra conducted by Andrew Manzek perform the Song Cycle. https://www.youtube.com/watch?v=0NJhFYMf0UE

Five other of the Shropshire Lad songs, including ‘With Rue…’, were published as ‘Bredon Hill and Other Songs’. Other works you may like are ‘The Banks of Green Willow’, you may remember we performed this last year.

Please let us know your favourite Butterworth pieces and performances.

If you would like you can buy the poems ‘A Shropshire Lad’ – there is a ‘Dover Thrift Edition’ for less than £2!

Now a bit about George Butterworth himself. He was born in London in 1885 but his family soon moved to York. He won a scholarship to Eaton and then went up to Trinity College Oxford. There he made friends with Cecil Sharp and Ralph Vaughan Williams. If you like Butterworth’s The Shropshire Lad check out Vaughn Williams’ songs, ‘On Wenlock Edge’ also based on these poems.

Butterworth died in 1916, shot by a sniper in the Battle of the Somme, he thus himself became one of “the lads that will never be old” (a phrase from ‘The lads in their hundreds’ – another Houseman poem form ‘A Shropshire Lad’).

Further information can be found in ‘George Butterworth – Memorial Volume’ edited by Wayne Smith. This contains citations, and appreciations as well as diary entries he made in the trenches. Also ‘Whom The Gods Love’ by Michael Barlow is about his life and music.

We hope you will come and join us at 7.30 pm Saturday 24 November to remember those that will never be old.

We rehearse at North Street Hall in Hornchurch on Wednesdays. Our concerts are at Frances Bardsley Academy, Romford and at the New Windmill Hall, Upminster.

Please see the join us section.